With more than 35 years of experience in civil litigation, Pat Ryan is best known for successful high-profile cases including his work as U.S. Attorney in the prosecution and conviction of Oklahoma City Bombing defendants Timothy McVeigh and Terry Nichols in Denver, and just recently securing the acquittal of a founder/CEO in one of the largest corporate fraud cases prosecuted by the U. S. Dept. of Justice. After serving four years in the United States Air Force, including two years as the Chief Military Justice for Southeast Asia, Ryan practiced at a local Oklahoma City law firm before establishing his own civil litigation firm in Oklahoma City in 1981. Ryan is former president of the Oklahoma County Bar Association and the Oklahoma Chapter of the American Board of Trial Advocates and former member of the Board of Governors of the Oklahoma State Bar Association.

Honors/Awards
Attorney General of the United States Gold Medallion
President’s Victim Rights Award
Oklahoma County Bar Association’s Leadership Award
Excellence awards from the City of Oklahoma City, the FBI and multiple federal and state agencies.
Listed in Every Edition of “Best Lawyers in America”
Listed as one of Oklahoma’s 10 “Super Lawyers”
Listed in “Chambers” as one of Oklahoma’s Top 3 Business Litigators 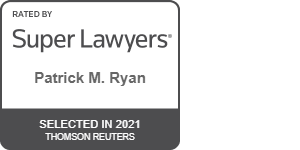